Torch is a Fire Slizer that lives in the Fire Region on the Slizer Planet. In the arena, he was fierce and not one to be taken lightly. He prefered to practice on his own, rarely communicating with his fellow Slizers. Then he was assigned to train the rookie Slizer Pyro.

At first, Torch ignored Pyro, leaving the rookie Slizer to train himself. Then, on a patrol along their region's border, Pyro was attacked by a Lava Rat. Seeing that his apprentice was helpless against the beast, Torch threw himself into the way. He quickly drove off the Lava Rat, saving Pyro's life. After returning to his hut, Torch swore he would give his all to train Pyro.

After the Lava Rat's attack, Pyro began to advance quickly through his training, and soon he became a full Slizer. Although Torch quickly reverted to his old ways, he still felt slightly responsable for Pyro.

Torch was one of the few Slizers who were not affected by the Meteorite crash. Since he had few friends, he had no one to lose. None of his Region's Slizer Drones were destroyed so his Drones aren't out to kill anyone since no one abandoned them.

Torch uses the element of Fire. He can also withstand extremely hot temperatures, wheras others would surely pass out.

Torch throws elemental Fire Disks at his opponents. He also has a flamethrower integrated into his left hand.

Torch is serious and stern. He rarely laughs, and he devotes all his attention to his fighting. However, Torch has a soft spot for Pyro, his only apprentice. 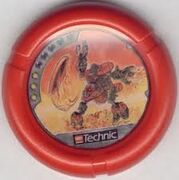 Torch's disk
Add a photo to this gallery

Retrieved from "https://customslizer.fandom.com/wiki/Torch?oldid=5818"
Community content is available under CC-BY-SA unless otherwise noted.