Flare came into existence after the Meteorite struck the Slizer Planet. He instantly began to hunt for survivors, killing any that he found.

Flare can launch signal flares from his hands, or he can channel the power into his Disks or blasters.

Flare carries a Disk Launcher (which also poses as his "tail") and a blaster.

Flare is devious and cunning. He will stop at nothing to achieve his ends. Though occasionally he shows a soft side and enjoys Torch. 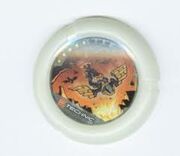 Flare's disk
Add a photo to this gallery
Retrieved from "https://customslizer.fandom.com/wiki/Flare?oldid=5846"
Community content is available under CC-BY-SA unless otherwise noted.